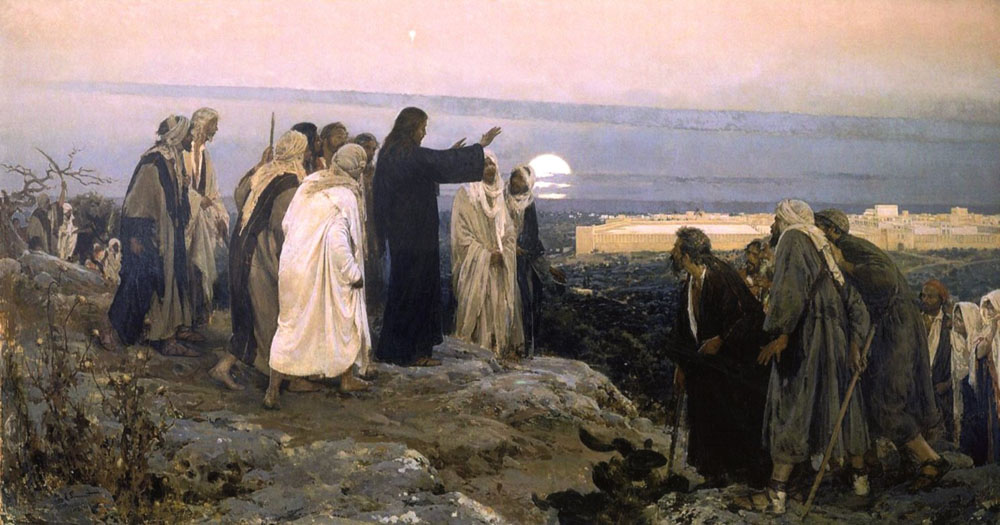 This image shows a painting by Enrique Simonet titled 'Flevit super illam' or 'He wept over it', i.e., Jerusalem and its Temple. While this painting shows Jesus standing rather than sitting on the Mount of Olives, the persons, places and things it shows are so similar to those described in Matt. 24:3 and Mark 13:3 of his Olivet (or End Time) discourses that the author regards it as the best available illustration of his delivery of these discourses. See also Luke 21:37. Included below are a series of artworks that illustrate the fulfillment of some of the most important End Time prophecies of Jesus described in these discourses. 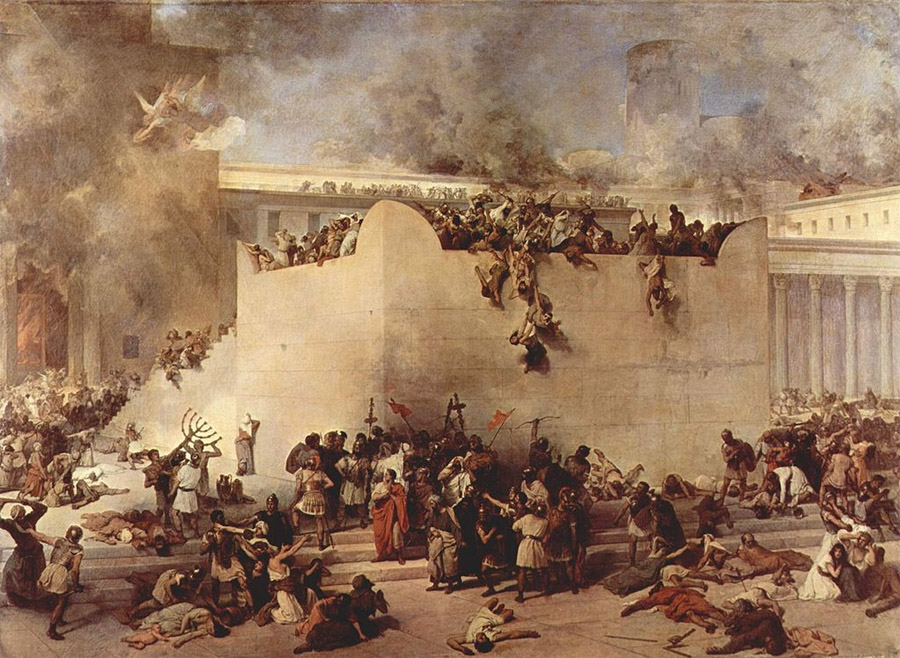 Fig. 2 – The Destruction of the Temple

This painting shows the fighting that took place around the altar in the Priest's Court of the Jerusalem Temple just before the Temple was looted and completely destroyed by the Romans in 70 A.D. Jesus is described as prophesying the destruction of this Temple in Matt. 24:2, Mark 13:2 and Luke 21:6, but not in the Gospel of John. This destruction was so complete that no part of it remained, thereby fulfilling Jesus' prophecy that, "… there shall not be left here one stone upon another,…". 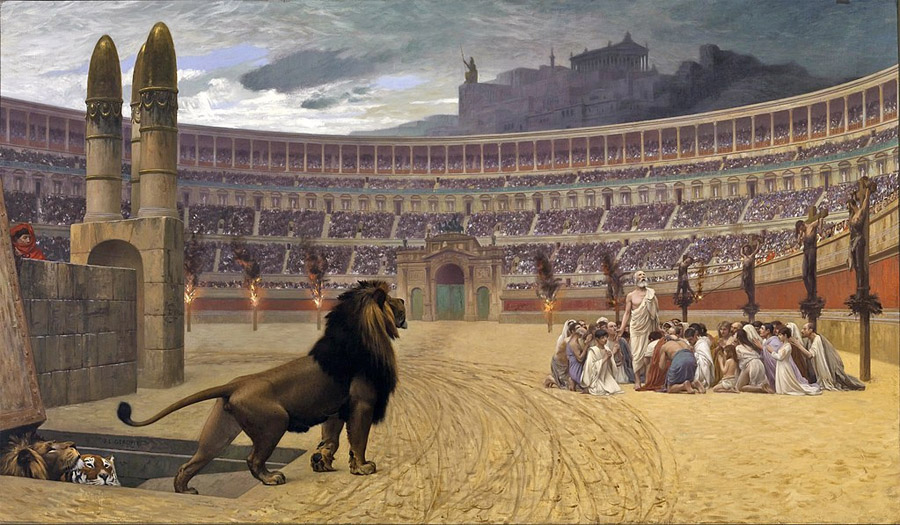 Fig. 3 - Christians Being Persecuted and Killed

This painting shows one of the many occasions on which early Christians were persecuted and killed for their faith. Such killings were prophesied by Jesus in Matt. 24:9 and 24:21, Mark 13:11-12 and Luke 21:12-16 of his End Time (or Olivet) discourses. The fact that it shows Christians being burned on crosses suggests that the artist had in mind the persecution initiated by the Emperor Nero in 64 A.D. after large parts of the city of Rome were destroyed by a fire he claimed was started by Christians. 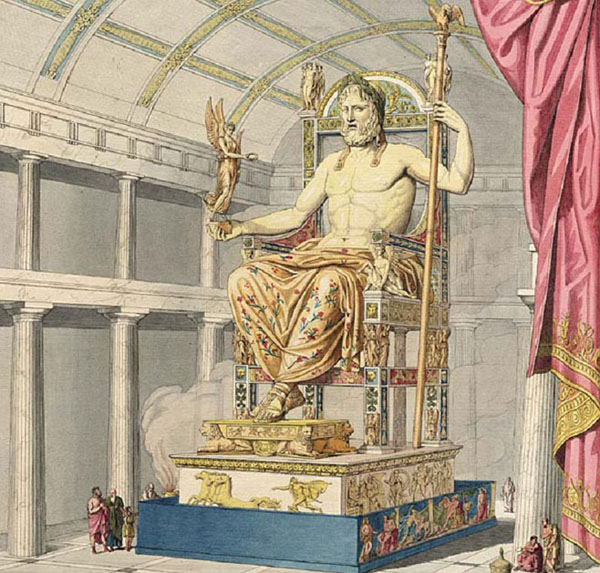 Fig. 4 - The Abomination of Desolation Spoken of By Daniel: The Olympian Zeus

This image is an artist's conception of the statue of Zeus that once appeared in his main temple in Olympia in Greece. King Antiochus IV Epiphanes had a statue of this Olympian Zeus placed in the Temple at Jerusalem in 167 B.C., and had pigs sacrificed on its altar. Daniel refers to these sacrilegious acts as 'the abomination that maketh desolate' (Dan. 11:31 and 12:11).

In v. 15 of Matt. 24:15-22 and v. 14 of Mark 13:14-20 Jesus prophesies that an abomination of the kind spoken of by Daniel will again stand in the Holy Place of the Temple, and that this will result in a time of great tribulation for God's elect. This prophecy came very close to being fulfilled in 40 A.D. when Caligula ordered that a statue of the Olympian Zeus with a head bearing his own likeness be placed in the Temple. Fortunately, Caligula's assassination prevented this from happening. These events are described at length by Josephus in The Jewish war, II, 184–205. Since the Temple was destroyed in 70 A.D., however, it is unclear if and how this prophecy can ever be fulfilled. 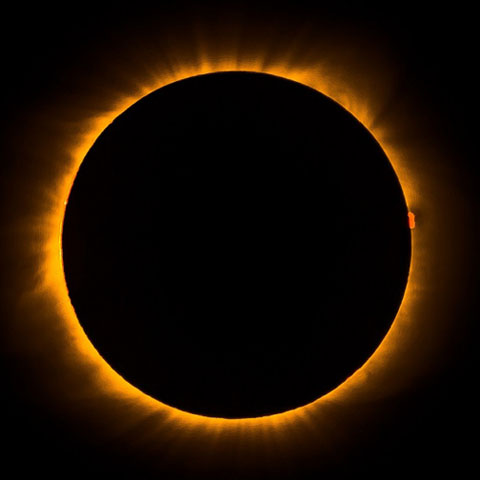 By Grégory Viénot (Own work) [CC BY-SA 4.0], via Wikimedia Commons 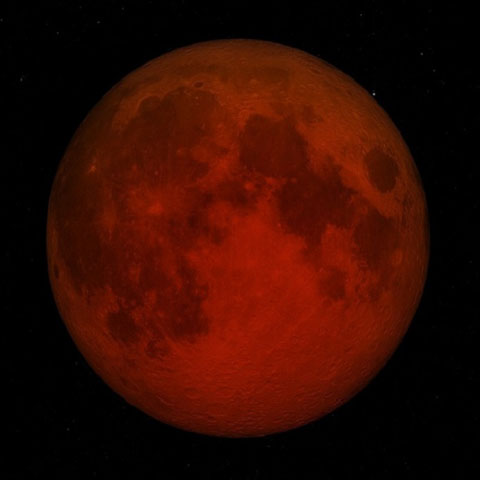 Fig. 5b – A Total Eclipse of the Moon

These images show possible fulfillments of the End Time prophecies of Jesus made in Matt. 24:29 and Mark 13:24. In Matthew's account of these prophecies Jesus says, "Immediately after the tribulation of those days shall the sun be darkened, and the moon shall not give her light, and the stars shall fall from heaven,…". In the most nearly similar account in Luke, Luke 21:25, Jesus says, "And there shall be signs in the sun, and in the moon, and in the stars;…". In these passages, the falling of (or signs in) the stars may refer to meteor showers of unprecedented intensity. 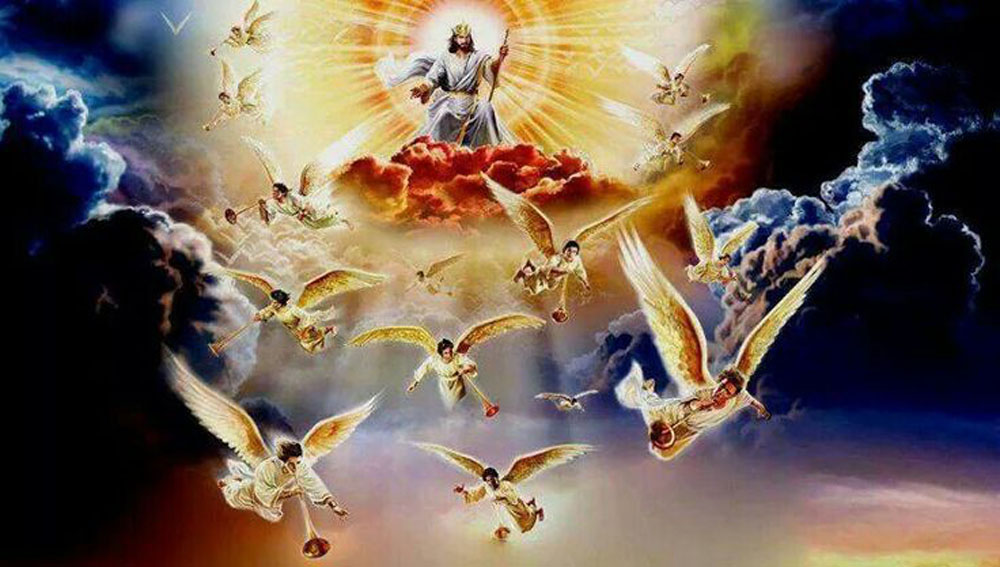 Fig. 6 - The Son of Man Coming in the Clouds of Heaven

This image shows an artist's conception of the Son of man coming in the clouds of heaven with power and great glory. Christians identify this Son of man with Jesus, and believe that this coming will fulfill the prophecies he makes in Matt. 24:30-34, Mark 13:26-30 and Luke 21:27-32. Surprisingly, although these passages begin and end with similarly worded verses, only Matthew and Mark's versions include prophecies about the Son of man sending angels to gather his elect.

While there are a number of similarities between the wordings of the first verses of the three above-cited passages and Dan. 7:13-14, the latter calls for "one like the Son of man" being brought before the Ancient of days and being given an everlasting dominion and a kingdom which shall not be destroyed. Later, however, Dan. 7:27, adds that the kingdom and dominion shall be given to the people of the saints of the most High, thereby suggesting that the Son of man may be a collective figure. 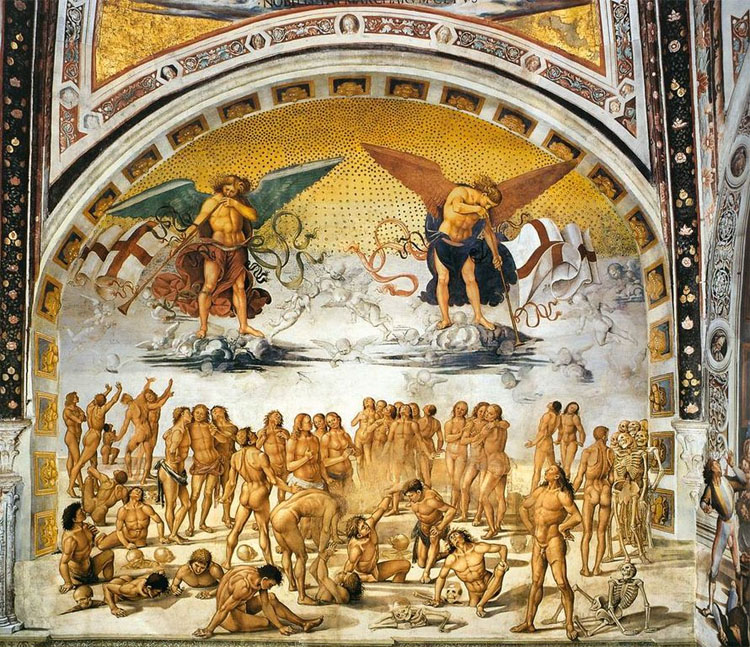 Fig. 7 – Angels Sent by the Son of Man to Gather His Elect

This fresco from the Chapel of San Brizio shows one artist's conception of the fulfillment of the End Time prophecy Jesus makes in v. 27 of Mark 13:26-30 and, in somewhat broader terms, in v. 31 of Matt. 24:30-34. Surprisingly, although the first and last verses of Luke 21:27-32 are very similar to the first and last verses of Matt. 24:30-34 and Mark 13:26-30, Luke's version of the intervening verses does not say anything about the Son of man sending angels to gather his elect. 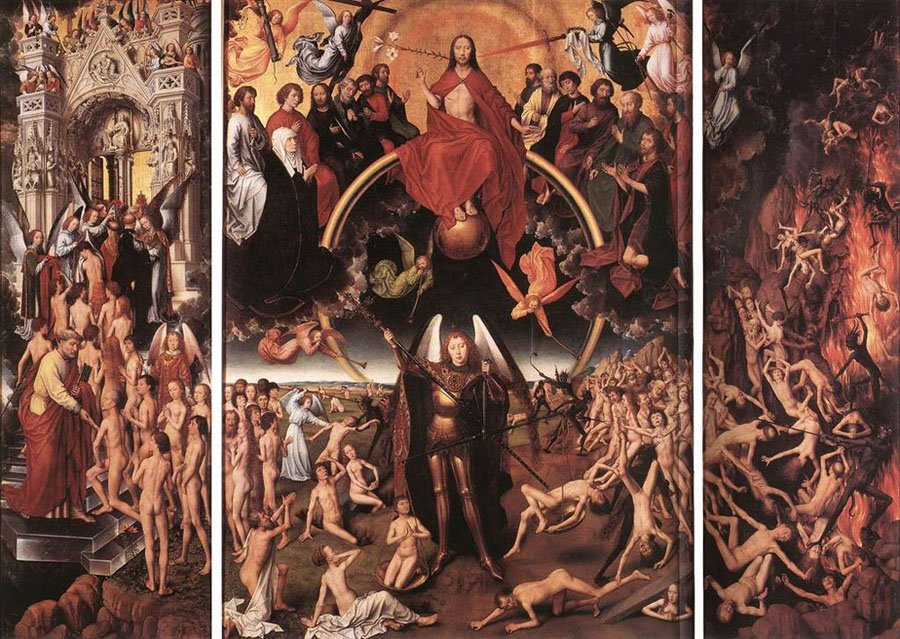 This painting shows a relatively simple and restrained version of one artist's attempt to illustrate the teachings of Jesus about the resurrection of the dead and the Last Judgment. By this the author means that this version confines itself for the most part to showing persons, places and things Jesus actually mentions in KJV Bible passages that discuss these subjects. In the versions shown in Figs. 9 and 10 below, on the other hand, the artists are less restrained and show things not mentioned by Jesus, such as hideous beings that can't wait to seize people and drag them off to hell. 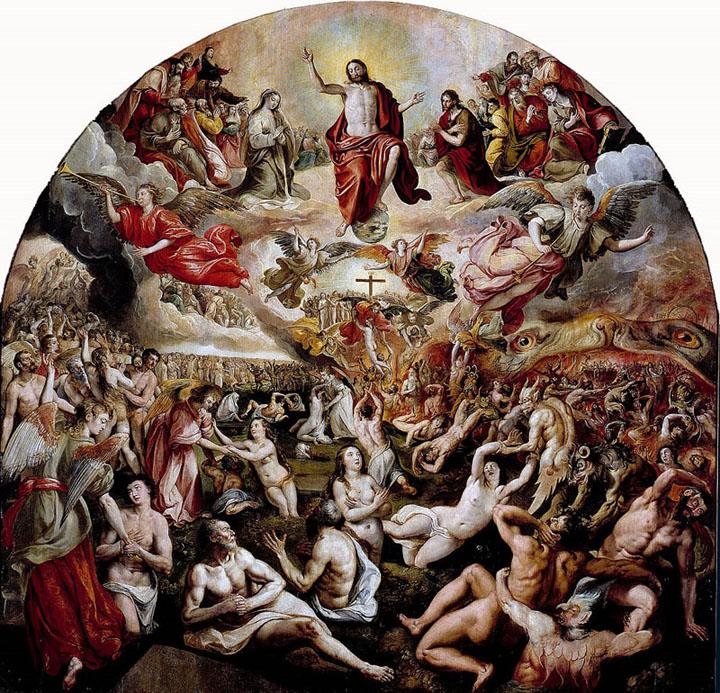 This painting shows another artist's attempt to illustrate the teachings of Jesus about the resurrection of the dead and the Last Judgment. In this version the artist not only shows demonic beings with hideous forms, he shows them as so anxious to start tormenting their victims that they seize them even before they are fully resurrected. Unlike Fig. 8, however, the artist does not include anything, such as the balance shown in Fig. 8, which seems to symbolize the process by which a person's fate is decided.

One particularly interesting feature of this painting is the 'hellmouth' figure shown at its right center. This figure was widely used as a prop in medieval morality plays to show the entrance to hell. Its most unusual feature is the showing of this entrance as a large mouth with an unlimited capacity to devour new victims. (See Prov. 27:20, which says, "Hell and destruction are never full;…".)  Another interesting feature is this version's apparent showing, near its center, of redeemed sinners escaping from purgatory. 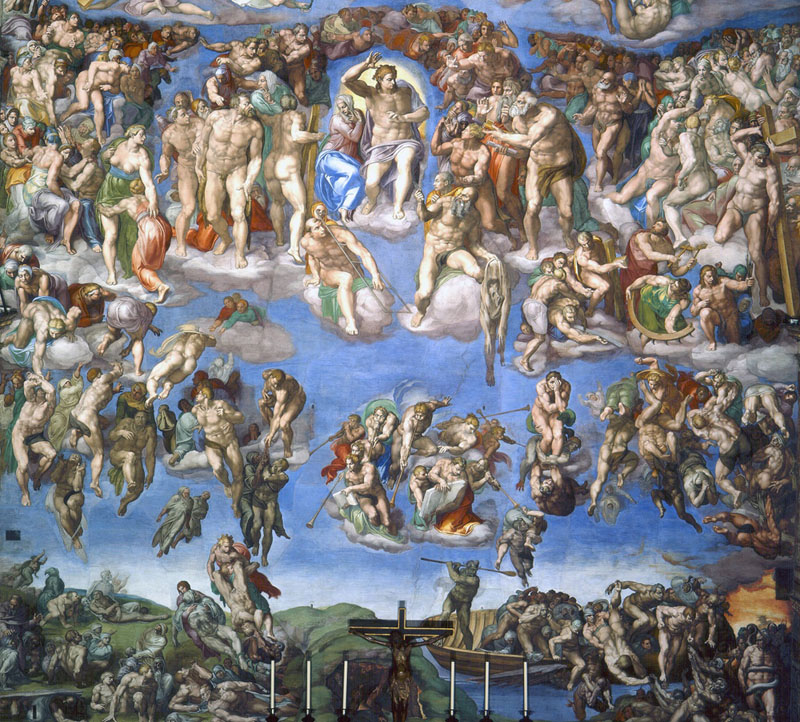 This image shows the fresco that Michelangelo (1475-1564) painted above the main altar of the Sistine chapel in the Vatican. In this image the artist, presumably with the full approval of the Pope, shows the dead being helped to rise from their graves and then being lifted above the earth. There they appear to be judged according to the things written in books held by angels, here shown just above the altar's crucifix. After being judged, the resurrected dead are either helped by angels to ascend to heaven or seized by demons and dragged down to hell, the entrance of which is shown at the lower right.

Surprisingly, in spite of the late date of this fresco, it shows features that can be traced back to the pre-Christian myths of Homer, Hesiod and Virgil, and to Greek philosophers like Plato. The most obvious of these appear at the lower right, where a demonic figure holding an oar plays the part of Charon, the boatman who ferries the dead across the river Styx to the realm of Hades. Unlike the pre-Christian myths, however, this image shows the latter as a place of fire, rather than of darkness, and as a place which the dead must be forced to enter.

It is no accident that this End Time prophecy website page includes three examples of artworks that illustrate different artists' conceptions of the fulfillment of End Time prophecies of Jesus about the Last Judgment. On the contrary, it includes multiple examples of artworks of this kind to make the point that there was once a time when the Roman Catholic Church placed such importance on promoting its teachings about the Last Judgment that it had paintings and frescos that illustrate it placed in churches throughout Christendom. As a result, the author could easily have included dozens of other examples of medieval and renaissance paintings and frescos that illustrate this Judgment. After the Protestant Reformation, however, it became unfashionable to place such emphasis on the physical aspects of salvation and damnation, and to instead emphasize the mental and emotional pain that accompanies a complete and permanent separation from God. It should, therefore, come as no surprise that artworks that illustrate the Last Judgment are still commonly found in older Catholic churches in Europe, but are not often seen today in Christian churches in the United States.

There is one other point about the Last Judgment that is worthy of mention at this point. This is that, in spite of the many differences between the details shown in different visual representations of the Last Judgment, all of the examples of this Judgment that the author is familiar with seem to be based on the description thereof that appears in Matt. 25:31-46. This too is apparently no accident. This is because the latter is arguably the only Biblical description of the Judgment that includes enough specific information for an artist to work with to produce a visually interesting representation of it. See, for, example, the all too brief descriptions of the Judgment that appear in Matt. 13:36-42, Matt. 13:47-50 and Matt. 16:27-28, and in Mark 9:43-48, Luke 14:14 and John 5:22-29. One can only wonder if this has anything to do with the fact that Matt. 25:31-46 seems to fit unnaturally at the end of Matthew's End Time Discourse, and to have no counterparts in Mark's or Luke's End Time Discourses.